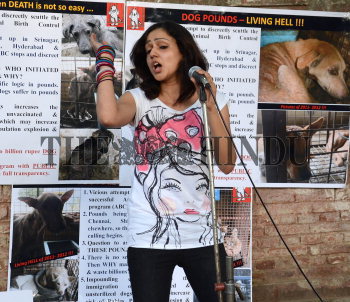 MAHA RALLY FOR ANIMAL RIGHTS IN INDIA AT JANTAR MA

Caption : NEW DELHI, 23/04/2012: A animal activist along with People for the Ethical Treatment of Animals (PETA) performing to persuade the Ministry of Environment and Forest to pass the new draft Animal Welfare Act 2011 during a Maha Rally for animal rights at Jantar Mantar, in New Delhi on April 23, 2012. Photo: Shanker Chakravarty