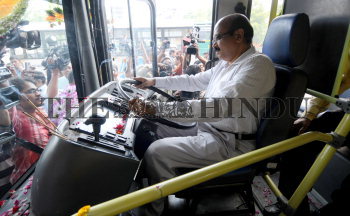 Caption : HYDERABAD, 19/04/2012: Andhra Pradesh State Road Transport Coporation Vice Chairman and Managing Director Bayyarapu Prasad Rao, is seen sitting behind the wheel of a semi low floor bus was flagged off in Hyderabad on April 19, 2012. He released 22 buses on four different routes leads to the Airport. The nominal fare of Rs. 65 per head as compared to the exorbitant rates charged by private operators. Photo:Mohammed Yousuf