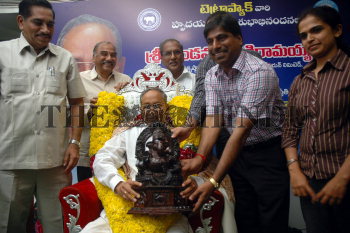 Caption : VIJAYAWADA, 14-04-2012: Krishna District Milk Producers Mutually Aided CoopeRATive Union chairman Mandava Janakiramaiah, who was conferred with Dr.Kurien Award, being felicitated by the Union and Tetra PACK at a function in Vijayawada on April 14, 2012. Photo:V.Raju