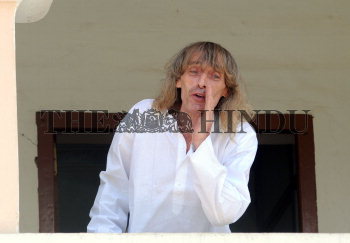 Caption : BHUBANESWAR, 12/04/2012: Italian tourist guide Paulo Bosusco, who was abducted by Maoist rebels more than a month ago, at the balcony of Government guest house after released from maoist captivity, in Bhubaneswar on April 12, 2012. He was released from a remote forest area of eastern India after the State Government agreed to release five rebels from prison. Basusco, along with Italian tourist Claudio Colangelo, was abducted on March 14 while on a trek in Orissa state. Colangelo was released 11 days later, but Basusco remained in captivity while negotiations took place between the rebels and the government. Photo: Ashoke Chakrabarty