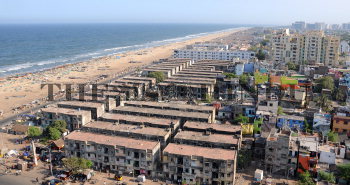 Caption : CHENNAI, 11-04-2012: The slums alongside of Marina beach behind lighthouse which was worst affected during the tsunami in the year 2004. A powerful earthquake hits Indonesia which is 1845 kilometers off Chennai triggered tsunami doubts in Southern Tamil Nadu. Later the warning was withdrawn. Photo:SR.Raghunathan