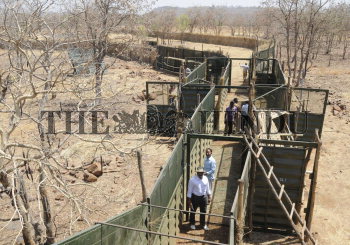 Caption : BHOPAL, 11/04/2012: Van Vihar National Park authorities installing a huge 'Capture Boma' (Inset) in Bhopal on April 11, 2012 for shifting nearly 450 spotted deers in the park to other habitats. The Van Vihar National Park has more than 1100 deers and due to the increasing numbers and less open space in the zoo. The forest management had planned to shift 450 deers to the Satpura forest range. Photo: AM.Faruqui