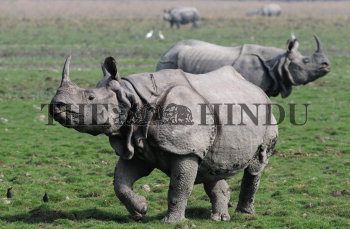 Caption : GUWAHATI, 09-04-2012: In this file photo a group of one horned Rhino is seen in Pobitora Wildlife Sanctuary in Morigaon district of Assam state. Assam has recorded an increase of 304 rhinos in total population over the past three years. The figures of the just concluded 2012 rhino census have revealed presence of total 2505 rhinos as against total 2201 rhinos found during 2009 rhino census. Of the total 2505 rhinos Kaziranga National Park (KNP) recorded 2290 rhinos followed by Orang National Park with 100 rhinos. Pobitora Wildlife Sanctuary recorded presence of 93 rhinos while Manas National Park recorded 22 rhinos received by the park through translocations of rhinos from Kaziranga and Pobitora under the Indian Rhino Vision (IRV) 2020 programme. Photo: Ritu Raj Konwar