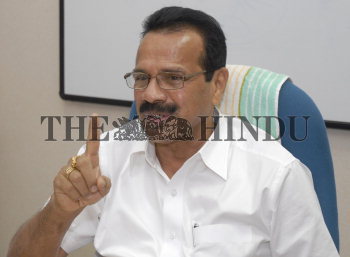 Caption : BANGALORE, 01/04/2012: Karnataka Chief Minister D.V. Sadananda Gowda interacting with the editorial team, after launching 'The Hindu in School' Edition for students, at The Hindu office at Infantry Road in Bangalore on April 01, 2012. The Hindu's standalone School Edition is SPECIALLY DESIGNED for pupils in classes 8-10 and will appear Monday-Saturday during term time. It will carry news and issues of interest to our young readers, informing and educating them ? and preparing them to be responsible citizens and thought leaders of tomorrow. Photo: K. Murali Kumar