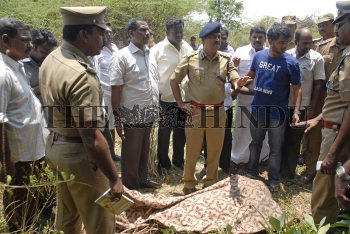 Caption : TIRUCHI, 29/03/2012: The body of K.N. Ramajayam, former State Transport Minister K.N. Nehru?s brother, who was murdered being recovered by Police at Thiruvalarcholai, in Tiruchi on March 29, 2012. Photo: M. Srinath