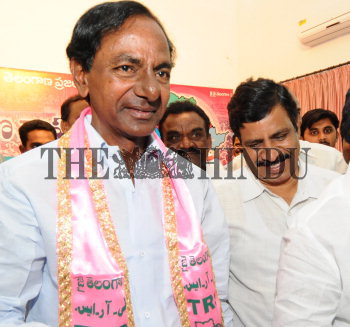 Caption : HYDERABAD, 21/03/2012: TELANGANA Rashtra Samiti president K. Chandrasekhara Rao in a highly charged-up mood after his party has won four seats in by-election held for six of the seven seats located in TELANGANA region, leaving the conference hall after a press conference at TELANGANA Bhavan, in Hyderabad on March 21, 2012. KCR reiterated his stand on Telengana and contended that it is high time the Prime Minister introduce the TELANGANA Bill in the ongoing budget session of the Parliament. Photo: Mohammed Yousuf