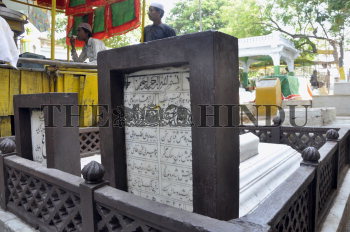 Caption : HYDERABAD:ANDHRA PRADESH:17/03/2012:One of the greatest Urdu poet, Dagh Dehlvi's TOMB in Dargah Yousufain. On Saturday his 107th death anniversary was observed. The TOMB which was in a neglected condition is now restored by some Urdu lovers. PHOTO:G_RAMAKRISHNA