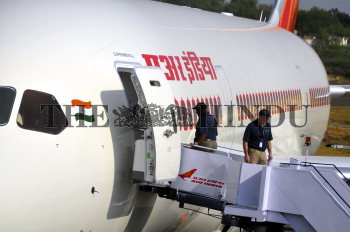 Caption : HYDERABAD, 14/03/2012: Next generation Boeing 787-8 series Dreamliner aircraft being inducted in Air India, kept on static display at the third edition of India Aviation 2012 airshow at Begumpet airport, in Hyderabad on March 14, 2012. This premier international exhibition and conference on civil aviation showcase and share with stakeholders growth opportunities in Indian aviation sector with the theme of this year?s event being ?India: The Emerging Aviation Hub?. In spite of the commercial airline companies incurring losses, business jet manufacturers see a lot of potential in India and are increasing participation at the Air Show to find a market among millionaires. Photo: Mohammed Yousuf