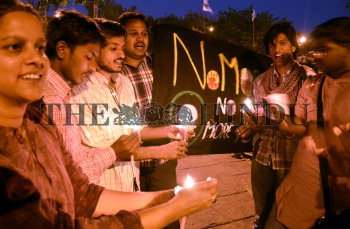 Caption : HYDERABAD, 11/03/2012: ANTI-NUCLEAR STAND: Activists of National Alliance of People's Movements holding a 'Candle Light Vigil' as a mark of protest against setting up of nuclear power plants, in Hyderabad on March 11, 2012. The event was organised to remember the meltdown of nuclear reactors at Fukushima Daiichi in Japan on March 10 last year following a massive earthquake. Photo: Nagara Gopal