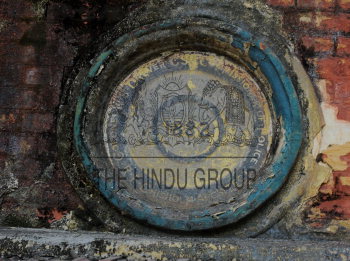 Caption : CHENNAI, TAMIL NADU, 11/03/2012: A view of the circular plaque, with the inscription "Colonel W.S. Drever CSI Commissioner of Police, R.F. Chisholm, architect" and the year 1882 inscribed on it, at the old Police Commissioner’s Office at Egmore in Chennai, on March 11, 2012. For a brief period from 1882, the police department functioned from this building on Police Commissioner Office Road in Egmore. It is not known why and when the office moved from Pantheon Road to here and then back. Photo: M. Vedhan