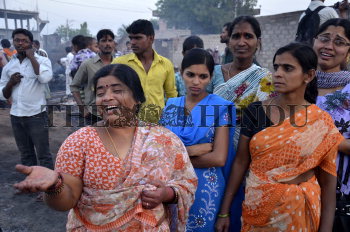 Caption : HYDERABAD, 10/03/2012: Residents of Sainagar in L.B. Nagar cry inconsolably after their houses and valuables were GUTTED in fire, in Hyderabad on March 10, 2012. A ten-year-old girl was charred to death while three others suffered burns after fire raged through the settlement. Photo: Nagara Gopal