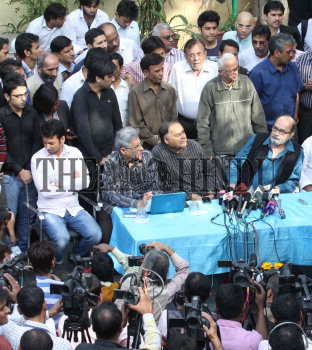 Caption : NEW DELHI, 09/03/2012: (From right to left) Saeed Naqvi, Journalist, Mohammed Adeeb, Rajya Sabha MP, S.K. Pande, President of the Delhi Union of Journalists, and Shauzab Kazmi, eldest son of freelance journalist Syed Mohammed Ahmad Kazmi who was arrested by the Delhi Police for his alleged involvement in the assassination bid on an Israeli diplomat in Capital on February 13, at a press conference to condemn journalist's arrest, in New Delhi on March 09, 2012. Photo: Sushil Kumar Verma