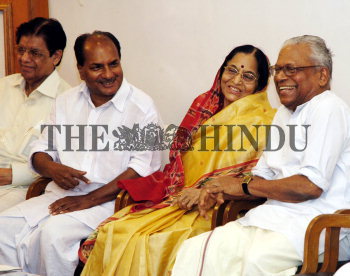 Caption : THIRUVANANTHAPURAM 05/7/2007------The presidential candidate of the UPA and the Left parties, Pratibha Patil, sharing a lighter moment with The Defence Minister, A.K.Antony and the Chief Minister, V.S.Achuthanandan during her interaction with the MLAs of Kerala in in Thiruvananthapuram on July 7, 2007 evening. To the extreme left is the Union Minister of State for External Affairs and Muslim League leader, E.Ahamed. Photo:C_Ratheesh kumar