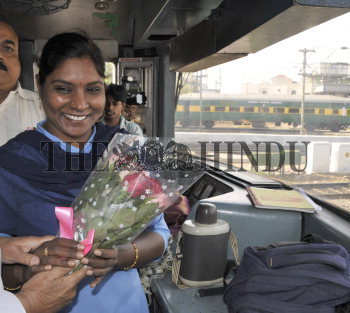 SATYAVATI GETS HER COLOURS -BL4

Caption : HYDERABAD (AP) - 08-03-2012 - BL/ INTERNATIONAL WOMAN'S DAY / STAND ALONE PIC : - EARNING HER COLOURS : Ms. S. Satyavathi , the Loco Pilot of the South Central Railway , is greeted after she pulled in the Intra City Multi Modal TRANSIT SYSTEM train from Falakhnuma to Lingampally at the Secunderabad Railway Station after her debut drive on the 'International Women's Day' on Thursday . Ms. Satyavati was posted today to take passengers . Starting her carrer as an assistant by shunting engines in the South Central Railway , she moved up to be a assistant loco pilot for goods trains and her day of reckoning was March 8 , the International Working Women's Day. PHOTO: P_V_SIVAKUMAR