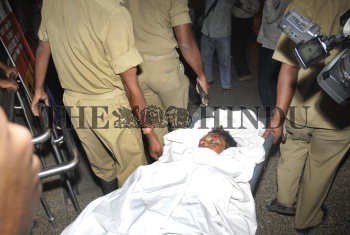 Caption : BANGALORE, 05/03/2012: The body of VISHNU Sharan being brought out of Namma Metro M.G. Road Station in Bangalore on March 05, 2012. VISHNU, a Class 11 student of St. Joseph's Boys High School on Museum Road, was killed instantly when he fell on the tracks in the way of a Namma Metro train. Photo: K. Bhagya Prakash