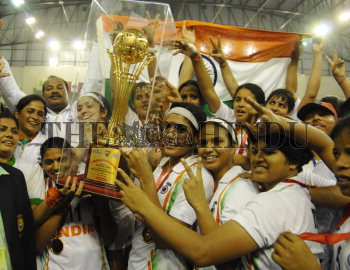 Caption : Patna: 04/03/2012: Mamata Pujari, captain of the Indian Women Kabaddi team, along with team members holding the trophy after defeating Iran 25-19 in the final to clinch the first women's kabaddi WORLD CUP title in Patna on March 04, 2012. Photo: Ranjeet Kumar