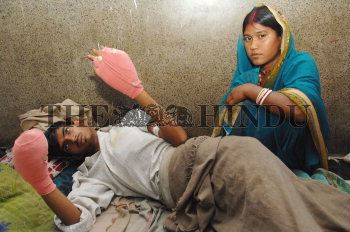 Caption : PATNA, 02/03/2012: Ramsagar Chandravanshi, a daily wage labourer, lying on the floor of the surgical ward of the Patna Medical College and Hospital for last nine days after his arms were allegedly mutilated by a contractor in Arwal district last month owing to his inability to repay a paltry debt, as his wife Buchchi Devi looks on, in Patna on March 02, 2012. Photo: Ranjeet Kumar