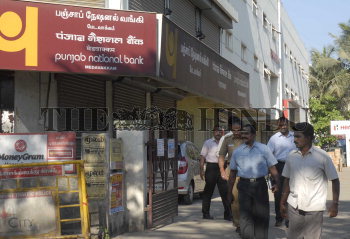 Caption : TAMBARAM, 28/02/2012:BEWARE OF SKIMMING, SKIMMING: Skimmer found in ATM kiosk of Punjab National Bank at Medavakkam Koot Road in Chennai on February 28, 2012. A skimmer device planted inside an ATM kiosk in the city. Initially suspected to be a bomb, was then identified to be an amateurish skimmer used to illegally copy bankcard details of ATM users including the PIN. Central Crime Branch doing investigation at the crime spot. Photo:A.Muralidharan