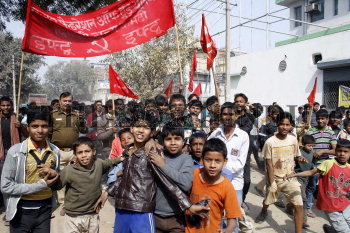 Caption : NEW DELHI, 28/02/2012: Children too showing their unity on All India Trade Unions strike carrying out a protest march during the nationwide strike called by Trade Unions at Mayapur Industrial area in New Delhi on February 28 2012. Photo: Shiv Kumar Pushpakar