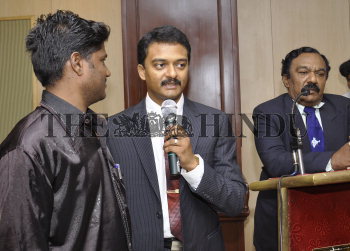 Caption : MADURAI, 27/02/2012: Surgeons Karthick Sivasubramaniyan and Sivaraman Sivasubramaniyan of Gurumithreen Hospital explain about the successful surgery they performed on a patient who was suffering from filariasis (elephantiasis), in Madurai on February 27, 2012. They have found a new technique of micro vascular plastic and reconstructive surgery by which even the worst conditions of filarial leg can be saved without amputation. Photo: G. Moorthy