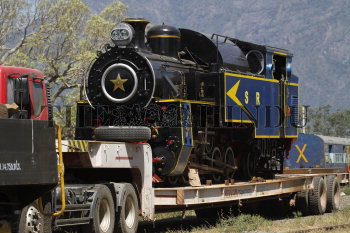 Caption : COIMBATORE, 27/02/2012: The second of the four new oil-fired steam locomotives for the Nilgiri Mountain Railway (NMR), being off loaded at Mettupalayam. The ?X' class metre gauge locomotive weighing about 50-tonnes manufactured at the Golden Rock Railway Workshop, in Tiruchi will operate on the Rack and Pinion system of the NMR section that has been declared as a World Heritage Railway system by the UNESCO. Photo: K. Ananthan