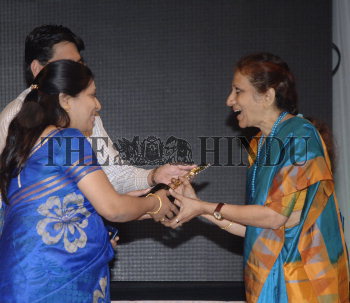 Caption : CHENNAI, 25/02/2012: Malathi Rangarajan of The Hindu being presented with award at "BIG Salute to Tamil Women Entertainers 2012", a function organised by Big Live and 92.7 Big FM to present award to women across seven regional markets and celebrate the success of the Indian Woman Entertainer such as cinema, television, music, media, dance and sports, at Anna Centenary Library auditorium, Kotturpuram in Chennai. Photo: M. Karunakaran 25-02-2012