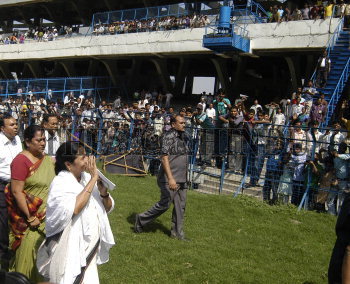 Caption : KOLKATA, 25/02/2012: West Bengal Chief Minister Mamata Banerjee during a programme organised by the State Labour Department in Kolkata on February 25, 2012. The Chief Minister provided monetary helps to the beneficiaries and also handed over identity CARDS and insurance policies to them. Photo:Sushanta Patronobish