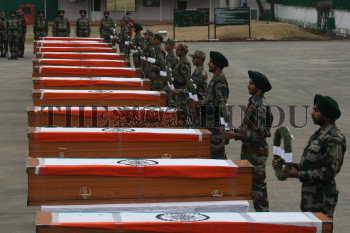 Caption : SRINAGAR, 25/02/2012: Army soldiers holding wreaths stand near the COFFINS containing the bodies of colleagues during a funeral ceremony at the Military garrison, in Srinagar on February 25, 2012. 17 Army soldiers on duty in the mountains of Kashmir were killed and three others missing in the massive avalanche on February 23, officials said. Photo: Nissar Ahmad