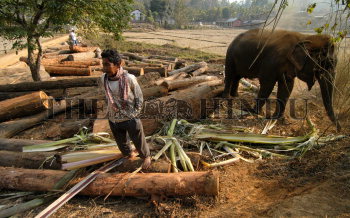 Caption : GARBHANGA FOREST, 22/02/2012: An elephant takes rest after pulling timber in Garbganga Reserve Forest in Kamrup (Metro) District of Assam about 16km away from Guwahati on February 22, 2012. All these timber have been cut illegally by the timber smugglers. The villagers of this area have claimed that forest mafia groups in the Guwahati city, in connivance with the Assam state forest officials, are felling trees to sell wood in the timber market. Illegal felling of valuable trees in Garbhanga Reserve forest, in the Kamrup district of Assam state is bringing grave threats to the forest reserve. The Garbhanga Reserve Forest falls in the bordering Ri Bhoi District of Meghalaya and smugglers often cross over from the Meghalaya side to the forest. Photo: Ritu Raj Konwar