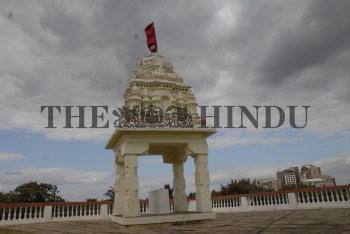 Caption : BANGALORE, 20/02/2012: Bruhat Bangalore Mahanagara Palike (BBMP), the Madras Engineering Group and Centre (MEG) had ?helped? the civic authority protect the watchtower constructed in the 16th Century by Kempe Gowda II. One of the Four watch towers said to have been built by Kempe Gowda of Magadi (1521 - 1569), at Ulsoor lake, and Marking the Limits to which it was predicted that the town of Bangalore would Extend, in Bangalore on Dec. 11, 2011. Photo: K.Murali Kumar