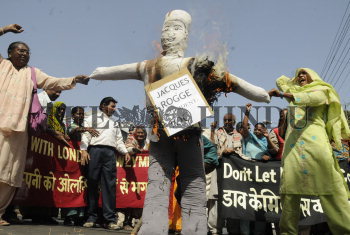 Caption : BHOPAL, 19/02/2012: Survivors of the 1984 Union Carbide disaster burning an effigy of President of the International Olympics Committee, Jacques Rogge, during a protest in Bhopal on February 19, 2012. The International Olympic Committee made clear that the Dow Chemical will remain a sponsor of the London Olympics and could not be held responsible for the lingering liabilities in Bhopal. Photo: A.M. Faruqui