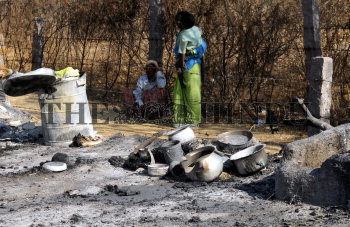 Caption : HYDERABAD, 18/02/2012: Belongings seen amidst the remains following a fire at Gundlapochampally village in MEDCHAL mandal of Ranga Reddy district in Hyderabad on February 18, 2012. Seven persons including four children and an old woman, belonging to three families, were burnt alive after fire raged through a fenced settlement of over 100 huts. Photo: K. Ramesh Babu