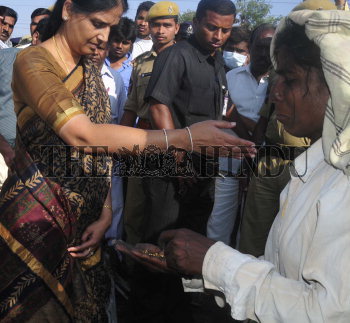 Caption : HYDERABAD, 18-02-2012: Tragedy strikes: Seven persons including four children and an old woman, belonging to three families, were burnt alive after fire raged through a fenced settlement of over 100 huts at Gundla Pochampally village on the outskirts of Hyderabad.The blaze reduced all the huts to ashes leaving the 100-odd construction labourer families hailing from Andhra Pradesh, Madhya Pradesh and Karnataka States distraught.Home Minister Sabitha Indra reddy visits the site of the fire accident at a slum in Gundlapochampally village in Medchal mandal, Rangareddy district near Hyderabad on February 18, 2012.Hyderabad on Saturday. One of the labourers who was able to salvage soem pieces of gold is also seen. Photo:K.Ramesh Babu