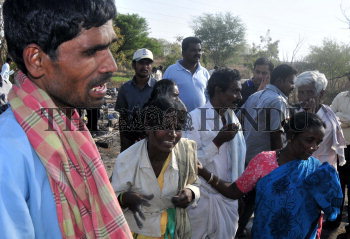 Caption : HYDERABAD, 18-02-2012: Tragedy strikes: Seven persons including four children and an old woman, belonging to three families, were burnt alive after fire raged through a fenced settlement of over 100 huts at Gundla Pochampally village on the outskirts of Hyderabad.The blaze reduced all the huts to ashes leaving the 100-odd construction labourer families hailing from Andhra Pradesh, Madhya Pradesh and Karnataka States distraught. A daily wage earner weeps after seeing all her belongings including cash and jewellery which was kept for marriage purpose burnt to ashes in a fire accident at a slum in Gundlapochampally village in MEDCHAL mandal, Rangareddy district near Hyderabad on February 18, 2012. Photo:K.Ramesh Babu