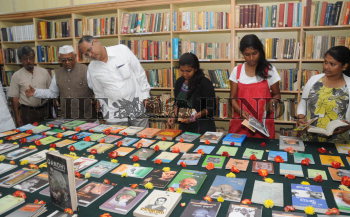 Caption : BANGALORE, 17/02/2012: Minister for Law and Parliamentary Affairs S. Suresh Kumar (third left) and Karnataka Gandhi Memorial Nidhi president Srinivasaiah (second left) having a look at the books on Gandhiji during the inauguration of a library at Gandhi Bhavan in Bangalore on February 17, 2012. Photo: G.P. Sampath Kumar