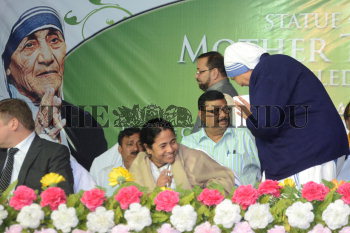 Caption : KOLKATA, 16/02/2012: West Bengal Chief Minister Mamata Banerjee greeting a nun of the Missionaries of Charity during a ceremony to unveil the statue of Mother Teresa in Kolkata on February 16, 2012. Photo: Sushanta Patronobish