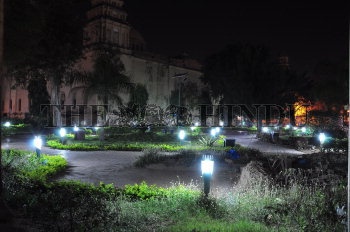 Caption : MADURAI, 16/02/2012: Even as the State reels from an acute power crisis with Madurai facing eight hours of power cuts, decorative lights at the park in the King Thirumalai Naick Palace premises are found switched on for more than three hours every day despite the park not being open to public due to renovation works. An official said that the lights were being kept on for maintenance and testing purposes. The park works have almost been completed and would be opened soon, the official added. Photo:S.James