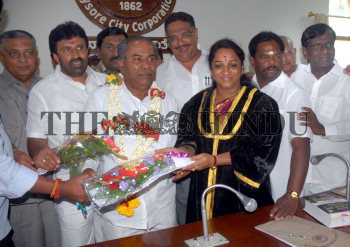 Caption : MYSORE, 13/02/2012: K.T.Cheluvegowda nominated as the Mysore City Corporation representative to the Mysore Urban Development Authority is being congratulated by the Mayor Pushpalatha Chikkanna, in Mysore on February 13, 2013. Photo: M.A.Sriram