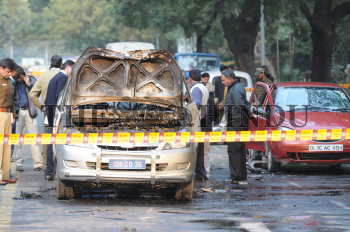 Caption : NEW DELHI, 13/02/2012: Blast rips through Israeli Embassy car:Tal Yehoshua Koren, an embassy official who is also the wife of Israel's defence attach? sustained serious injuries when a bomb fixed to her Innova van went off at 3.15 p.m near Aurangzeb road in New Delhi on February 13, 2012. Ms Koren was on her way to pick up her children from school. The diplomat, who was travelling on the back seat, sustained serious injuries as the blast ripped through the vehicle's metal body. Her driver, Manoj Sharma, lost control of the car after the explosion, and sustained injuries when the van crashed into a road divider. Photo:V.Sudershan