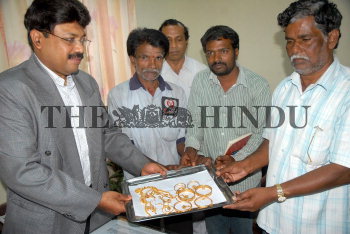 Caption : MYSORE, 12/02/2012: Senior Divisional Commercial Manager Anup Dayanand Sadhu HANDING OVER the jewellery items to Sheikh Mohammad which was found in the toilet of a railway compartment by contract labourer Channabassappa (second from left) in Mysore on February 12, 2012. Channabassappa was cleaning the stationary Dharwad Express when he found a lunch box containing jewellery in the toilet. He alerted his supervisor and the lunch box was handed OVER to the station manager. Photo: M.A. Sriram