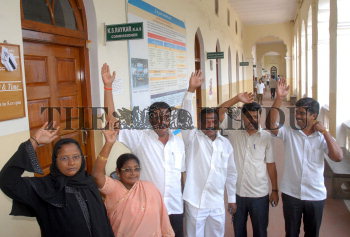 Caption : MYSORE, 10/02/2012: Members of the Mysore City Corporation (MCC) Standing Committee on Accounts locked up the Commissioner's room to protest his absence for the meeting in Mysore on February 10, 2012. Photo: M.A. Sriram