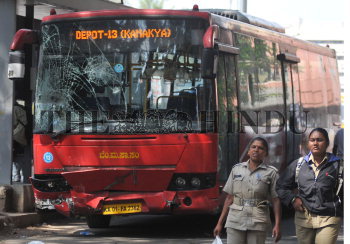 Caption : BANGALORE, 10/02/2012: BMTC VOLVO bus which was involved in Serial accident on Bannergatta Road at MICO Layout Police Limits on February 10, 2012. One motorist was killed in the accident. Volvo operated by the Bangalore Metro Transport Corporation (BMTC) ran over a motorcyclist, while also damaging three vehicles. Photo: V. Sreenivasa Murthy