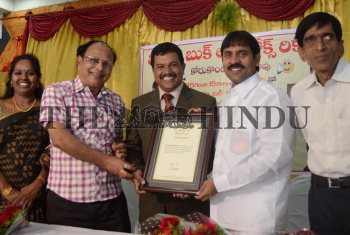 Caption : VISAKHAPATNAM, 09/02/2012: K. Ranga Rao (centre) being congratulated by MLA M. Vijaya Prasad (second from right) and stage actor and film writer Kasi Viswanadh, as actor Kallu Chidambaram looks on, on receiving certifciate from Limca Book of Records for setting a record on telling JOKES continuously for 35 hours and 15 minues during May last, in Visakhapatnam on February 09, 2012. Photo: C.V. Subrahmanyam