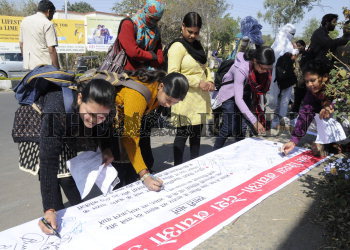 Caption : BHOPAL, 08/02/2012: All India Revolutionary Students Organisation, Revolutionary Youth Federation of India and the Shiksha ADHIKAR Manch jointly conducting a signature campaign in front of a Girls College during their 'Save Higher Education - Save Country' campaign in protest against The Foreign Educational Institutions (Entry and Regulation) Bill in Parliament, in Bhopal on February 08, 2012. Photo: A.M. Faruqui