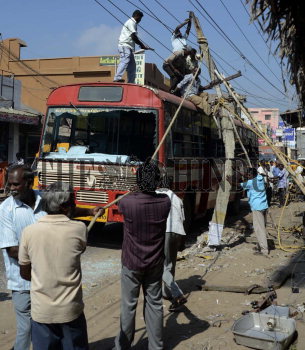 Caption : KANCHEEPURAM, 08/02/2012: The STC bus which damaged a cement over head power cable post near Rangasamy Kulam in Kancheepuram on February 08, 2012, is used by the EB men to remove the damaged post. Photo: B. Jothi Ramalingam