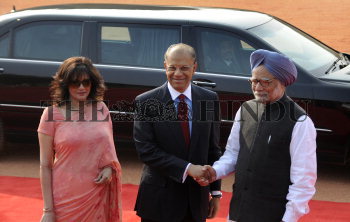 Caption : NEW DELHI, 07/02/2012: Mauritius Prime Minister Navinchandra Ramgoolam, accompanied by his wife Veena Ramgoolam, being greeted by his Indian counterpart Manmohan Singh during the ceremonial reception at the forecourt of Rashtrapati Bhavan, in New Delhi on February 07, 2012. Photo: Rajeev Bhatt