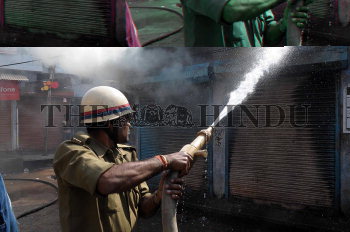 Caption : LUCKNOW, 06/02/2012: Fireman dousing the fire: Tension prevailed in the old city area of the city after two sects of Muslims clashed leading to brick-batting and arson on February 06, 2012, in Sahadatganj. The angry mob indulged in stone-pelting and arson in which one shop was set afire. Photo: Subir Roy