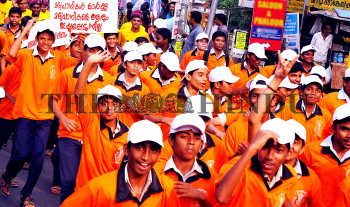 Caption : KOZHIKODE, 06/02/2012: Enthusiastic youngsters prove a point against ALCOHOLISM and drug abuse at a mass run organised by the Excise Department in Kozhikode on February 06, 2012, to create awareness of the ill effects of the two scourges. Photo: S. Ramesh Kurup