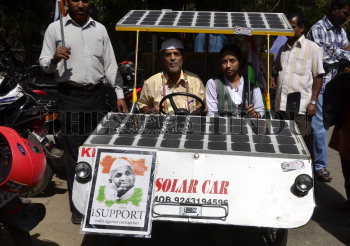 A TEAM OF VOLUNTEERS FROM INDIA AGAINST CORRUPTION

Caption : BANGALORE, 06/02/2012: A team of volunteers from India Against CORRUPTION is embarking on a CAMPAIGN to spread the message about the ANTI CORRUPTION CAMPAIGN spearheaded by Anna Hazare and the team will be travelling a distance of close to 1000 km by road, starting their journey from Bangalore and reach Cochin. They will traverse this distance in a vehicle that runs on a solar energy to spread the message ' Stop CORRUPTION and No Pollution', in Bangalore on February 06, 2012. Photo: K.Gopinathan