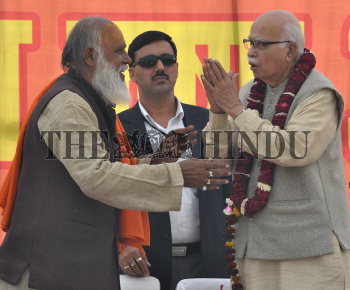 Caption : FAIZABAD, 04/02/2012:BJP leader L.K. Advani being greeted by the priest of Hanumangarhi Mhant Mohandas during an election campaign rally for his party candidate at GIC ground in Faizabad on February 04, 2012. Photo: Subir Roy